Is my Mastodon link just a feed, or is it a functional account?

I’ve set up my Mastodon-compatible username (hollie@hollie.io), and I can find it by going to my regular Masto account and searching for it. However, am I right that this is just a feed of my blog? It isn’t anything I can edit? Is there any way to interact with comments or follow people from this “account”?

I looked at it tonight and noticed that - from the menu - it looks like it has all the same functionality as a regular Mastodon account. It even offers me the ability to DM this profile (which I did, but it didn’t seem show up anywhere). This seems like it could be really confusing for someone looking a friend up and finding what seems to be their name/photo, and then following them, but they never get followed back and comments aren’t responded to. 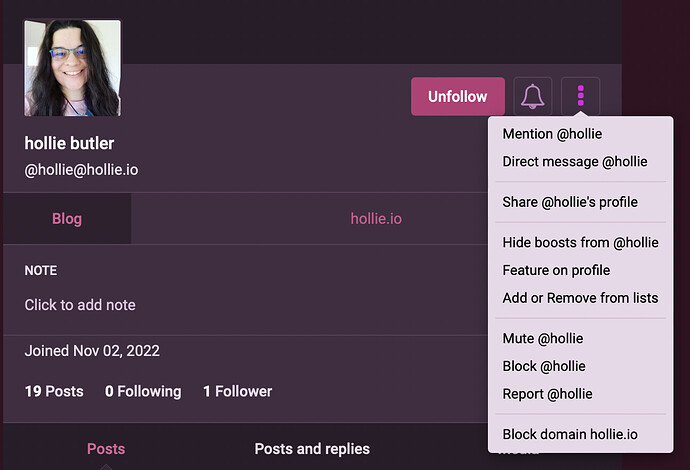 However, am I right that this is just a feed of my blog? It isn’t anything I can edit?

It’s not just a feed; your blog is ActivityPub compatible. The protocol supports editing and deleting content as well. I don’t know if @manton has implemented that for Micro.blog, though.

Yes, if someone comments, it will show up under your mentions in Micro.blog. And you can, in turn, reply to that comment from Micro.blog. In the same way, you can follow other ActivityPub compatible sources, like a Mastodon account, from Micro.blog. Just search for the full username:

Screenshot from Micro.blog’s Discover section. Search result page with one hit for the term @Gargon@mastodon.social.1968×614 71 KB

Here’s an example search for @Gargron@mastodon.social.

But your blog is not a Mastodon account. It’s just a regular blog that speaks the same protocol as Mastodon, so some interactions between the two platforms are possible.

It even offers me the ability to DM this profile (which I did, but it didn’t seem show up anywhere).

Micro.blog does not have anything like direct messages, so these messages should be delivered to you via email instead, according to the FAQ section in the documentation.

Can confirm that a Mastodon-originated DM was converted to an email to me from Micro.blog.

Thanks for this explanation @sod, it’s very helpful!

Looks like the DM worked for @toddgrotenhuis but I haven’t seen anything from mine yet (checked email a few times, did a search to make sure I wasn’t missing it). But my home Mastodon server (weirder.earth) is struggling with some maintenance issues right now, so that might be the problem.

So it sounds like this is a useful way for folks who just want to follow a few people on Mastodon to use their micro blog to do this, but if they want the full Masto experience, having your own account it still the best way to go.

Yes, a lot is going on in the fediverse right now, so it might be a temporary hiccup. Also, it’s still somewhat early in Micro. blog’s support for ActivityPub. Like @manton wrote the other day, it’s not 100 % implemented yet:

Definitely still some quirks in our ActivityPub implementation, which I’ll be smoothing out as we notice problems. Getting better, though! So much new activity as people bail on Twitter.

Should the problems with DMs persist, it’s probably best to send an email to help@micro.blog.

And yes, people who want all the bells and whistles Mastodon offers, like content warnings, polls, and whatnot, should indeed sign up for a Mastodon account instead. Or rock multiple personas on the fediverse.

I’m not aware of any DM issues, so let me know if it’s still not working. We haven’t completely ruled out some of the other bells and whistles, but definitely want to get the basics working really well first before we consider anything else.