I’ve been experimenting with Font Awesome as explained in Manton’s recent video, and I’m having an issue: the selected icons are showing up on my site as squares. For example,

I associate this with eg. characters missing from a typeface, but I thought that was what Font Awesome was designed to solve. In case it’s relevant, I do have the following in my custom CSS (though removing it didn’t seem to solve the problem):

If you can spot what I’m doing wrong, or have any other tips on solving this, they’re greatly appreciated. Thanks.

I was seeing the same thing with Firefox and Arc, though the icons showed up just fine in Safari. I changed my icons to embedded SVG’s to get around the issue in my theme.

Robert, thanks for your reply — this is super-interesting, and I’ve just done the same test:

Font Awesome icon shows up perfectly fine in Safari (both macOS & iOS), but doesn’t work (is replaced with an empty square) on Arc, Chrome, & Firefox.

@manton is this working as intended, or have I broken something? (I followed the steps in your video, but maybe one of my custom theme / CSS tweaks has created a conflict?)

@frostedechoes can you point me to a resource that explains how I might be able to adopt your SVG solution?

Hey Adam, the best resource I was able to find was this tutorial. I always create a class in my CSS for the SVG, and add elements to constrain the SVG icon to the right size. Something like this.

Then, you can go to Font Awesome and copy the SVG code. 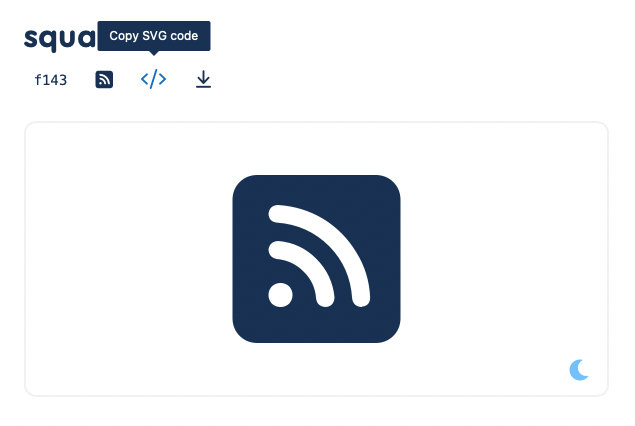 Paste that inline, then (using the example CSS above), add the class="rss" within the brackets.

If you have any issues, just shoot me an email.

@frostedechoes thanks so much for this explainer. I’ve managed to get this working on my site, but — given that it’s something of a pain to create (light & dark theme versions of) CSS classes for each SVG, I may wait on a response from Manton before I go ahead and do the work of implementing this site-wide.

I am having exactly the same issue. I was hoping to avoid the SVG approach, but that’s my next step.

Did you (or @Manton) get a solution to the original question?

I see the same issue (though also broken on Safari) and had to use the SVG icons.