I noticed tonight that my micro.blog posts weren’t cross-posting. I took a look at my settings in the web app and found that my Twitter and Mastodon accounts were no longer linked. I’m not sure when this happened as I was able to cross-post about 6 days ago. When I tried to link them, it said that I needed to upgrade my subscription in order to do so. Then I noticed that my credit card was removed from my account, even though I don’t recall removing it. I re-added my card, but I guess since it hasn’t been charged for cross-posting bot, I still can’t cross-post. I can’t seem to subscribe to just the cross-posting either. How can I fix this?

I’m having the same problem. Cross-posting stopped for me after Dec 30, which was the last date I had been billed for. It seems like the cross-posting only plan has been removed and I’ve been converted to a free plan. But I was never notified of any upcoming plan changes.

I just signed up (because of the cross-posting capabilities) and cannot find it anywhere (in my account settings). Can somebody point me into the right direction? 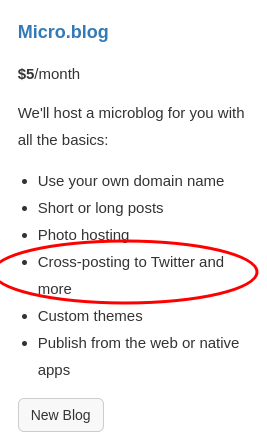 @tedn - if you login and then visit the Feeds page you can link various accounts, including Twitter, and then enable/disable cross-posting.

@dgs Stupid me. Works as advertised.

+1 here. Strangely enough, one of my category feeds is not cross-posting (it’s correctly linked to Twitter and LinkedIn, as far as I can tell, but nothing shows up in those places). Another category feed is linked to Mastodon and correctly cross-posting. And lastly, I have one general feed linked to Mastodon as well, and it works correctly, except for the posts from the first category, the one that does not post to Twitter nor LinkedIn. I’m going nuts.

When you use category feeds, there is a major limitation to keep in mind: the same post can’t appear in multiple feeds under Account → Edit Feeds & Cross-posting. If you have a general feed that includes most or all posts, that sounds like what might be happening. The basics with Micro.blog still “work” but cross-posting will be unreliable because if Micro.blog has already seen the post, it will skip it when the post is found in another feed.

This is a limitation that I want to fix, but it’s a fairly big change.

I somehow managed to delete the micro.blogs’ own RSS feed (on top of the others) because I clicked the delete button. (Don’t ask why, please

) Now, all my crossposting options are gone. How can I get them back?

Okay, I just added the RSS feed of my own site and it seems to have done the trick …

Glad you got it back. Micro.blog will happily let you remove the feed even though it’s usually not a great idea.

I’ve improved the messaging about this but it probably needs to be improved further. Thanks!

I’m probably missing something about cross-posting too. I have pushed a post on my blog. It shows up on my micro.blog timeline. I have (only) one feed that’s meant to post it further to LinkedIn, Twitter and Mastodon but nothing happened and it has been 12 hours. Any idea?

I seem to have lost the crossposting options on my feeds page – I no longer see any of the icons for twitter, mastodon, etc.

@brett It looks like your feed was removed but then added back as an “importing” feed. Those feeds don’t have cross-posting options because they are assumed to be extra feeds that copy posts into your blog.